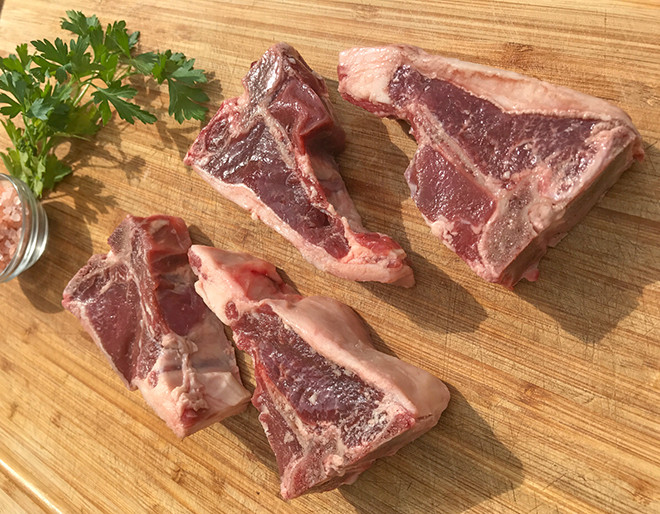 These Lamb Loin Chops include the tenderloin and come from our rare-breed heritage St. Croix sheep. There are two chops per package, totaling approximately 0.4lb. One package is one serving, generally, so purchase one package for each person you plan to serve. This is a delicate cut from a heritage animal, and these chops are small, but they will amaze you with their flavor and clean-taste. This is not lamb like you've ever tasted.

St. Croix sheep are on the Slow Food Arc of Taste for their extremely mild-flavored meat — it's almost sweet. If you've never had 100% grass-fed lamb, you are in for a new and delicious clean eating experience. Most American and even NZ lamb is heavily grain fed, leading to strong off-flavors that people just associate with lamb, but it's not how lamb is supposed to taste! Grain-fed lamb is also greasy and fatty, whereas the fat in grass-fed lamb melts in your mouth without coating the meat (or your tongue).

The best way to cook lamb chops is good sear on both sides (either in a pan with lard, which has a very high smoke point) or on the grill and finishing in the oven (or in a corner of the grill, away from direct flames). People think lamb is fancy restaurant food, but it's as easy to cook at home as beef and even more nutritious. Lamb is an especially important food for women to eat, as it is high in iron, and even men may become deficient in assimilable iron eating the Standard American Died (S.A.D.). The iron in lamb is a highly digestible form of heme iron, unlike the plant-based iron in supplements, which isn't nearly as absorbable to the body. Furthermore, heme iron from meat makes the iron in plants more digestible.

Also, did you know that lamb is the most ecologically responsible meat you can eat?! Sheep are small-framed animals (compared to cows) and their body maintenance requirements are low, so they can put a tremendous amount of energy into reproduction. Mama ewes are capable of weaning their body weight in the form of two lambs every year, purely on solar energy (in the form of grass) and water alone. That means every year a mama ewe can eat from the land and produce her body equivalent in two other sheep, who can in turn eat entirely off of the land in the form of solar energy captured in grass and all the while make the land better than she found it! The latter is only possible with religious rotational grazing, which for us means that the sheep are moved twice a day in season to fresh grass, and they don't return to the spot after they have grazed until it's fully recovered, allowing the soil to capture more and more carbon from the atmosphere every year as the plant roots deepen and then die back with each grazing, creating food for underground life with every grazing followed by appropriate rest. Sheep are able to do well on pastures that are less fertile than the cows need, so they are a crucial part of our land-healing program, as they will up-cycle grasses that the higher-octane dairy cows turn their noses up at. Sheep are really humble and lovely creatures, and eating humanely raised, 100% grass-fed lamb gives these beautiful animals a job and a purpose and a reason to keep healing the earth!

Unlike conventional lamb, which is pumped full of parasiticides and chemicals to keep animals alive amidst the constant parasite pressure of non-rotated pastures and indoor feeding systems (small ruminants such as sheep are generally much more parasite prone than cattle), our sheep are selected for parasite resistance and we worm them very infrequently, and animals that need worming leave the flock. The result is clean meat. (It's common practice in the lamb industry to worm animals monthly.)

Every second and fourth Saturdays of the month 11am-1pm